Welcome to the website for Charité – Universitätsmedizin Berlin, a joint institution of Freie Universität Berlin and Humboldt-Universität zu Berlin.

To navigate directly to a specific page or section, please use the 'Go To' commands as follows:

Department of Child and Adolescent Psychiatry, Psychosomatic Medicine and Psychotherapy

From here, you can access the Emergencies page, Contact Us page, Accessibility Settings, Language Selection, and Search page. 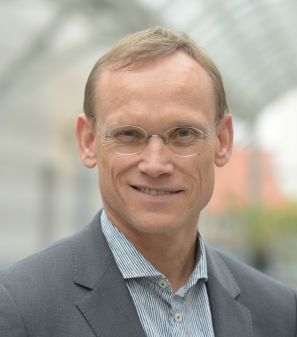 Prof. Dr. med Christoph Correll is Chair of the Department of Child and Adolescent Psychiatry, Psychosomatic Medicine and Psychotherapy, Charité – Universitätsmedizin Berlin, Campus Virchow, Berlin, Germany. Furthermore, he is Professor of Psychiatry at The Donald and Barbara Zucker School of Medicine at Hofstra/Northwell, New York, USA. He completed his medical studies at the Free University of Berlin in Germany, and Dundee University Medical School in Scotland. He is board certified in general psychiatry and child and adolescent psychiatry, having completed both residencies at The Zucker Hillside Hospital in New York City. Since 1997, he has been working and conducting research in New York, USA.

Professor Correll’s research and clinical work focus on the identification, characterisation and treatment of youth and adults with severe mental illness, including psychotic and mood disorders, spanning all disease stages from the prodrome to first and multi-episode illness and up to refractory illness. He further focuses on psychopharmacology, epidemiology, comparative effectiveness, meta-analyses, the risk–benefit evaluation of psychotropic medications, and the interface between physical health and mental health.

Professor Correll has authored or co-authored over 500 journal articles and his H-index was 62 in January 2018. He has served on several expert consensus panels on the use of antipsychotics across a range of psychiatric disorders, is a reviewer for over 70 peer-reviewed journals and an editorial board member of 12 scientific journals.

Professor Correll is the Principal Investigator or Steering Committee member of several large, federally funded grants. He has received over 40 national and international research awards and fellowships for his work. Since 2014, the year of inception of this metric, he has been listed every year by Thomson Reuters as one of the 100 “most influential scientific minds” and “top 1% cited scientists in the area of psychiatry”. Furthermore, since 2017 he has been ranked by Expertscape as number one in the area of “psychopharmacology“ (in January 2018, of altogether 56,243 evaluated scientists).

Below you can find Prof. Correll's CV.